We like to do it at night, behind closed doors, with the lights out. But when it comes down to it, anywhere will do — on the train, at school, the movie theater. It’s something we don’t discuss unless we’re not getting enough, and then it’s all we can think about. Some consider it sinful, but I say it’s a biological need, and when there’s no one around to do it with, I do it all alone. 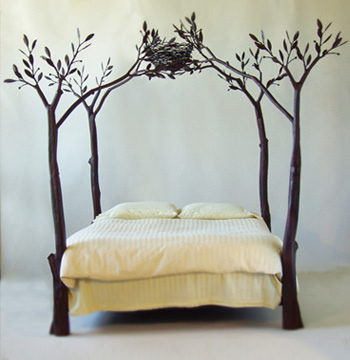 I’m talking about sleep, and in our house it’s become an extremely popular (if increasingly uncommon) activity. There’s the small matter of the newborn baby who has taken up residence in our bedroom — a sweet, precious newborn baby who typically sleeps like an angel,  but has a sixth sense about the nights when we really need eight hours, those nights before a big project or an early morning meeting or a long drive across a barren desert while being forced to listen to  recorded lectures about Keynesian economics. On those nights it’s Bam! wakey wakey, wet diaper, need a bottle, need a cuddle, need to whimper, need to babble, need to assert my supremacy as Omnipotent Ruler of  Everything You Once Held to Be Sacred.

And then there’s the matter of my husband, who has no trouble sleeping. No trouble at all, not even when he happens to be precariously gripping a glass of red wine over a plush white carpet, or when he’s, say, driving 80 mph on an unfamiliar freeway. You see, my husband’s narcoleptic — no, not River-Phoenix-in-My-Own-Private-Idaho-narcoleptic where he collapses to the ground in a snoring heap with absolutely no warning. More like, “Wow, I’m really sleepy all of a sudden, now what is it you were say-zzzzzzzzzzzz.” In other words, he feels it coming on, I see it coming on, he rubs his eyes, and I either take the wine glass away or tell him to pull off the next freeway exit (situations which, I assure you, are mutually exclusive).

And finally, there’s me. Aside from being occasionally jolted awake by a tiny creature clamoring to suckle at my breast, and aside from the fact that I do more than my fair share of late-night drives home from wherever it is my husband has spilled wine on the carpet, I try to get a decent amount of sleep. Usually 7-8 hours, give or take a midnight bottle-feeding or two. And that’s because if I do not get 7-8 hours of sleep, I am rendered incapable of properly dressing myself, doing even basic mathematical calculations or speaking the English language in a way that is understandable to others. Plus, I’m not very nice. I’m just one of those people who needs to sleep like other people need to horde cats. I can’t help myself.

There are, of course, those nights when sleep is not mine to be had. There are the aforementioned raging parties the baby decides to throw at 3 a.m., or the times when I get stuck in what my friend Chad calls “the loop” — where I think about thinking about thinking all night long until I swear the sun won’t come up at all, that the End Times have finally come and wouldn’t you know that I didn’t even get a good night’s sleep on the last day of my existence. It’s those nights when I think sleep is overrated, when I wish I could multi-task while my brain clears its cache or whatever it is that happens while I’m unconscious and drooling.  Think about how much I could get done with another eight hours! There are plenty of other things I can do while laying prone with my eyes closed! Entire civilizations have been built that way!

OK, maybe not entire civilizations (unless you count the M.C. Escher-like cliffside village that I am forced to wander in my recurring dream about the aliens who invade Cinque Terre and hijack my undersea research vessel). But I’d be happy getting by on six hours. That’s two more hours I’d have for, well, writing this blog. And, well … my other biological needs.

I like to think of the “om” symbol as the tattoo that got away. I’m inkless and don’t mind being so (giving birth was enough pain for me, thank you very much), but if I were to get a tattoo it would be the mighty aum — that illustrious symbol of  the one pursuit I keep coming back to, that steadfast friend that welcomes me to the mat when I am ready and able,  or waits with a patient heart while I flail around in confusion, gather my wits about me, and return anew.

There aren’t many other things in my life that can lay the same claim. Sure, I’ve loved french fries since the moment I first laid eyes on one, but I’m not about to get a tattoo of a crinkle-cut Ore Ida. And now even the aum tattoo has become a little too trendy and ubiquitous for my taste (but then again, when you think about it, that’s pretty much the point of a symbol that represents the entire universe).

I started practicing yoga in 1995 at the ripe old age of 19 when my hippie university dance teacher taught the class a vinyasa sequence as part of our daily warm up. I didn’t even know I was doing yoga at the time, but I still remember the unique series of postures, which started with vrksasana (tree) and moved in a graceful symphony through Virabhadrasana (Warrior)  I, II and III. I used to practice the same sequence in the blistering heat of my sandy compound in Cameroon while a Peace Corps volunteer, and to this day I believe it single-handedly kept me fit, thin and sane (even if the local villagers took me for a complete lunatic).

My practice gained intensity when I joined the Yoga Teacher Training Program at UC San Diego, which led to a few gigs substituting for teachers in my hometown of Encinitas, Calif. — a world mecca for yoga practice with a studio on just about every block. One particularly memorable class I taught took place during high tide at Swami’s beach (at the base of Yogananda’s Self-Realization Fellowship) and ended with the entire class backed up against the cliff during savasana, the sand flies messing with our meditation and the waves threatening to overtake us all.

My practice lurched off its tracks in dramatic fashion when I experienced three miscarriages in the span of one year. I had been taking rigorous ashtanga-based classes up to four times a week, and even though I knew it was completely irrational and contrary to all scientific evidence, I became convinced that yoga had killed my babies. So I stopped. And then I got pregnant again. And in my second trimester, after I had seen the baby’s heart miraculously beating and his lungs miraculously inflating on an ultrasound, I took my own heart and lungs back to the mat and once again, stayed fit, (relatively) thin and sane throughout my full-term pregnancy. Savasana became far less relaxing with a human being kicking at me from inside the womb, but it was during those nine months that I finally began to understand love, and God, and the true meaning of aum.

Now, four months after the birth of my baby, I can only manage to practice in fits and starts (take your pick of about a dozen different excuses — I’ve got them all covered). My yoga of late has primarily been the practice of focusing my attention on my child, experiencing the present moment in the splash of bath water, an unexpected giggle, the sigh of my sleeping babe. But  I will begin a twice weekly class again at the end of June, and  I plan to finish the last requirements for my teaching certificate next spring. I’m not sure if teaching is truly my passion, but I like to finish what I start, even if I stop once, twice, three times over. As long as my feet make their way back to tadasana at some point, as long as my hands come together in anjali mudra … well,  the stuff in between is yoga, too.

And now, in honor of my renewed vows, a little renewed focus and study:

You don’t have to believe everything you think June 26, 2008

From Yoga Journal: “It might seem strange to us that the yogis place the seat of wisdom in the heart, which we typically associate with our emotions, and not the brain. But in yoga, the brain is actually symbolized by the moon, which reflects the sun’s light but generates none of its own. This kind of knowledge is worthwhile for dealing with mundane affairs, and is even necessary to a certain extent for the lower stages of spiritual practice. But in the end, the brain is inherently limited in what it can know and is prone to what Patanjali calls misconception (viparyaya) or false knowledge of the self.”