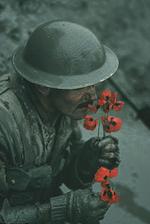 Mike and I listened to an episode of “This American Life” last weekend about the Ten Commandments. Each commandment was represented by a story, and “Thou Shalt Not Kill” was told from the point of view of a chaplain in the military. He said one of the soldiers in his unit wanted to talk to him about all the killing that was going on in Iraq. Apparently, the soldier had no idea that he would actually be shooting at real, live human beings because he’d only been trained to shoot targets.

At first, I was appalled to think that a soldier wouldn’t put two and two together and realize what he’s signed up for. Does he think they give him a rifle so he can shoot at prairie dogs? Exactly what does he think war is? But then I read something like the following, and my disgust is directed elsewhere:

It’s no wonder he thought it was all just rainbows and unicorns.